Every Schnauzer Has His Story – Here’s Harvey’s

They say every dog has its day. For Miniature Schnauzer Harvey, a relatively new PD Insurance member, this was indeed the case. Not only did this dog have his day – he had three! And Harvey’s only a few months old.

However, before his three good days of luck (read: well-insured quality vet care), he first had to experience three bad ones.

To be precise, this ultra-cute, cheeky, fun-loving little Schnauzer faced different dangers on three separate occasions within a short amount of time. Because his pet parents acted quickly and confidently, Harvey was given the medical treatments he needed to triumph.

Harvey joined his family in February as a 10-week-old pup, after the wishes of his new family’s daughter were granted. She had spent more than 12 months begging and pleading with mum and dad that they all deserved a puppy. We’re told Harvey was the perfect addition to the family and everyone loves him.

“Harvey is a quirky wee guy, really smart and super-enthusiastic about everything.”

The breeders told his new family Harvey seemed a bit cheeky but would probably turn out to be extremely loyal. They were right on both counts!

Harvey’s pet parent Amanda says, “He loves walks in the gully near our house, big cuddles on the sofa, and getting dried off with the hairdryer! He’s also very adept – and fast – at removing inner soles from shoes.”

Sadly, our cute and quirky pup was chewing on a rawhide bone when the first incident took place.

Harvey choked on what was a large chew bone to start with that he’d managed to gnaw down to a small piece. Luckily, Harvey barfed up some of what he’d ingested, although it was hard to say how much or whether he’d cleared it. The foamy goo that came up alarmed everyone.

His family didn’t know if he’d be OK, but they got him medical treatment right away. They could act fast, reassured they had pet insurance to cover much of the cost. Harvey was distressed but thankfully came out of his general consult safe and sound.

Harvey emerged from the rawhide chew incident unscathed and recovered well. But a few days later he faced down a new danger, this time a chair. The little guy was innocently doing his thing when a chair fell on his foot and broke it in three places.

Again, his family got him to the vet right away. Harvey needed three sets of x-rays and a splinting that cost well over $1,000.

While his foot was healing, they had to limit his movement and put a little plastic sleeve over his cast every time he went outside to do his duties. It took about six weeks to heal the tiny fractures.

“It was pretty challenging but he was amazingly patient and healed beautifully. You wouldn’t guess looking at him now.”

The story of the Schnauzer and the grape

Possibly the most shocking of all Harvey’s incidents involves a grape. When you think of a grape, you hardly think of a villain. However, grapes can be highly toxic to dogs and can potentially cause them to have kidney failure.

“Who would think that one little grape could cause so much trouble?”

But Harvey ate a grape that rolled off a plate and the little Schnauzer had to go to the after-hours vet. There, they induced vomiting and he stayed overnight hooked up to IV fluids.

Amanda recollects, “When the vets induced vomiting most of a grape came up. However, because Harvey is a small breed and was only young – and because we weren’t absolutely 100% sure he’d only swallowed one – they were uncertain about whether he’d be safe from consequences.”

“Their recommendation was to take baseline blood tests, put him on IV fluids, give him a charcoal treatment and keep him in overnight under observation to give him the very best chance.”

“Of course this happened after-hours in the weekend, so it was an expensive exercise, but because we had our pet insurance we didn’t think twice.”

Read about things that can poison your pet, as well as poisonous plants for dogs.

What happens if a dog eats a grape?

Amanda says, “If we hadn’t noticed him swallowing the grape, known it was potentially a problem or got him treatment in time, Harvey could have ended up with kidney failure.

Once this happens, the chance of recovery is very slim. Or, he could have had milder symptoms or no issues at all. This is one of the frustrating things about grape/raisin poisoning – some dogs are more susceptible than others.”

“It’s tricky as there is not much research on what part of the fruit is toxic to them and how much of it will cause problems so it’s unwise to take any chances. Plus problems don’t show up immediately. Even after getting Harvey treatment, we had to get another set of blood tests done later that week to be sure his kidney function was OK.”

Thankfully this Miniature Schnauzer survived the grape ordeal. But read can dogs eat grapes to see what can happen from this seemingly innocuous fruit!

Harvey comes home from an overnight stay at the vet

Amanda describes how “Harvey was super happy to see us after his night at the vet. He literally did not know which way up he wanted to be, turning somersaults with excitement. However, I have to confess that is pretty much Harvey’s standard setting – he loves people, assumes everyone is his friend (or wants to be) and I’m sure he lapped up a lot of attention while he was there.”

Harvey’s family has given him the best in thought, care and attention, making sure the Miniature Schnauzer is safe at every turn. And turns do continue to crop up in the life of this well-loved pup!

Amanda tells us, “We are so glad we chose to get Harvey dog insurance. Puppies are so curious and busy and you just can’t predict what might happen next.”

“In fact, Harvey has seen more of the vet since these incidents as we discovered he had a little row of dermal cysts on his head, which required surgery. Our vet joked: ‘Trust Harvey to have something weird’.”

“We’ve found PD Insurance brilliant. The claims process is so easy and the team is really quick to respond. Your refund is in your account so fast and the communication is great throughout.”

“We adore Harvey. So I’m sure we would have begged or borrowed to do whatever was needed to keep him well, but having dog insurance took financial worry completely out of the equation.”

Hey reader – is your favourite canine safeguarded with the PD Insurance soft landing? If you sign up online you’ll get one or more months of pet insurance FREE! Go on, get them an early first birthday present and bring yourself peace of mind. 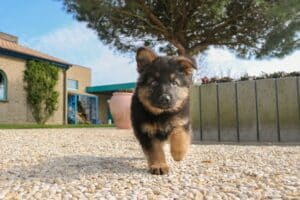