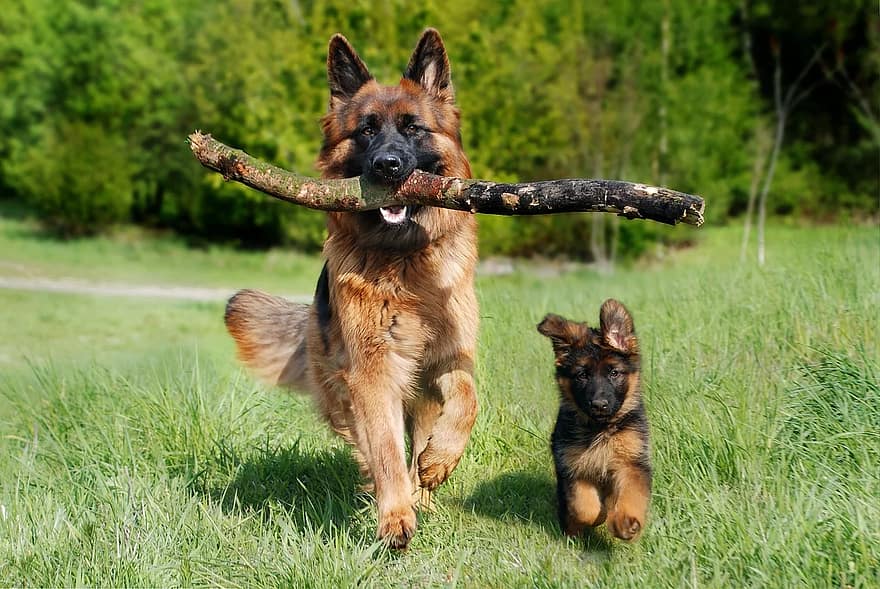 The German Shepherd is a superhero dog. That’s because they’re big, strong, brave and most of all extremely loyal. These dogs are highly adaptable, intelligent and love to have a purpose in life.

For this reason, they make great companion dogs for loving and attentive families. And because they learn and listen so well, they make good working dogs too. In fact, the first ever guide dog in the world was a GS!

Families with a German Shepherd will have a devoted best friend and a deeply committed protector. Not to mention they’re highly sought after as guardians of society too, helping to defend their citizens as loyal police dogs.

These handsome pups have oodles of energy and are bright and enthusiastic – always eager to love, learn and play. So, if you’re becoming a first time pet owner, and you have lots of time for training and exercise, this might be the pup for you.

Read this article to find why the GS looks like a wolf, how to keep them healthy and more…

As the name implies, this breed was originally a herding dog from Germany. Its story begins with a cavalry captain and vet named Max von Stephanitz and a dog named Hektor Linksrhein.

Max liked the idea of dogs performing important functions as a working dog and wanted to breed a dog who would excel in herding. He found the perfect dog to begin his new dog breed while visiting a dog show. The dog he found was named Hektor. But as soon as he became Hektor’s pet parent, Max renamed him Horand von Grafrath.

That same year, in 1899, Max founded the Society for German Shepherd Dogs and began breeding Horand with other breeder’s dogs with similar desirable traits. Read our article on pros and cons of a purebred dog.

Although it’s uncertain, there’s a lot of speculation that Horand was 25% wolf. And according to the breeding registry, some of the dogs who were selected for breeding were also wolfdogs (part domestic dog, part wolf).

This why the German Shepherd looks so like a wolf in its build and form. Could it also be the reason why the GS has such a powerful territorial guarding instinct… maybe!

German Shepherd appearance and other markers

With its wolf-like appearance comprising pointy ears, long snout, big build and bushy tail, this breed is usually black and brown. The GS sheds its fur more or less… all the time! But not to worry, here’s our article on pet fur removal.

Here are some additional facts about the GSD:

A German Shepherds’ high intelligence and strong need for a purpose needs to be met with adequate attention, training, and exercise. This is a breed which forms very deep bonds and loyalty to those they love. And because of this, they can quickly become lonely and experience separation anxiety if left to their own devices without proper direction.

As you can imagine, such a powerful and motivated dog experiencing anxiety is not a good thing and nor is it safe. Because in a dog, anxiety can take the form of aggression.

So yes, to sum it up, German Shepherds can be aggressive if not trained or stimulated well. This is especially likely to be directed at strangers as they’ll guard either their own people or their territory.

Therefore, as a responsible GS puppy parent, it’s important to spend lots of time playing with and training your puppy. There are many ways to go about this, from basic puppy training tips to puppy games that give you a chance to bond.

And for more advanced obedience training, you could also send your GS to a good puppy school.

German shepherds are prone to several genetic health problems due to smaller breeding pools. The most common of these involve their joints being poorly developed, leading to problems later in life.

Here are some of the most common GS health issues:

Speak to your vet about helping prevent these issues by choosing the best exercise and diet for your pet’s optimum health.

As a committed pet parent, a dog insurance plan means you can give your German Shepherd a soft landing. With a highly cost-effective pet insurance policy, you can get a reduction on a large array of pet health costs. These include hospitalisation for accidents and illnesses, medication, non-routine vet visits and more.

And let it be known that, your German Shepherd is eligible for one or more months of free pet insurance if you sign up with us online. So, if you’re not already with PD Insurance you can join now for free and move onto the Accident, Classic or Deluxe plan later.

Go on… get a quick quote now.