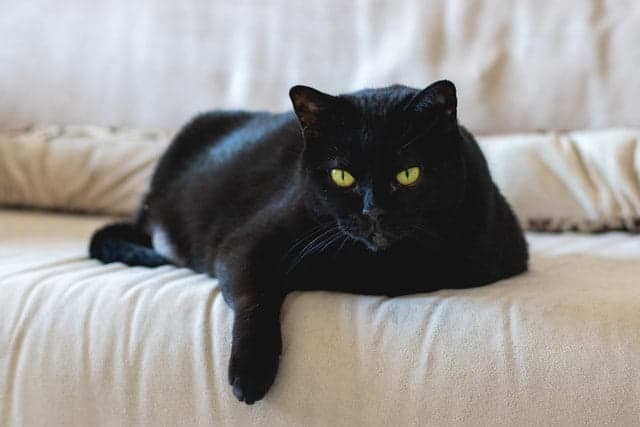 Did you know black cats have their very own annual day of appreciation? It’s already passed for this year, but that doesn’t matter because as confirmed cat fanatics we love our midnight coloured friends anytime. We’ll celebrate them always – hence this article!

However, we know not everyone feels quite the same.

It’s funny, when you think about it, that almost every country has some kind of urban legend, superstition, or fable around black cats. And while there’s more than we’d like that depict them as the villains of the cat world, we’re glad to see at least some of these stories and legends show our beloved black cats as the good guys too.

So in honour of our pitch black furkids, let’s look into it in more detail; from adoption facts and figures to folklore.

In many parts of Europe, black cats are seen as bad omens. In most Western cultures, black cats are commonly associated with things like Halloween, witches, and evil spirits.

There are many reasons behind this, stemming from different parts of the world. For instance, in Celtic mythology a large black cat called the Cat Sith was said to be able to steal someone’s soul before the gods could get to it. And in the Middle Ages in Europe, witches were thought to be able to transform into black cats.

Happily though, black cats don’t always get a bad reputation. In other parts of the world, they’re seen as bringers of fortune, luck, and love. In Scotland, Britain and Japan, black cats are signs of prosperity and good fortunes.

They were even worshipped in Ancient Egypt; in Egyptian mythology the Goddess of motherhood Bastet is represented as a black cat.

Basically, the world was once divided over black cats. But over the years, many of these superstitions have faded. And here at PD Insurance, we think they’re amazing. Just like any other cat, really!

According to research, black cats might be the animals that are adopted last. Whether or not this is true is another story. And whether or not it’s a global phenomenon is unclear too. But anecdotally speaking the idea has certainly gained traction, with many shelters saying black cats are less popular than others.

Animal welfare founder Christine Bayka told the BBC black cats’ low adoption rates might be related to something completely different. Rather than superstitions, it’s all about the rise of social media. Yep, really *sigh*

Apparently, their adoption are low because they don’t show up well in selfies. A word from us: instead of passing over a gorgeous black pet, just read up on pet photography tips. And then get snapping for that dedicated cat Instagram account.

Did you know that for a cat to be true black, they need to have two copies of the dominant black gene? Without that, they’re actually tabbies in disguise. So if you’ve got a black cat, take a close look in the sunshine. If they’re not true black, you might be able to make out the telltale M shape on their forehead, or some giveaway tabby stripes or spots.

Here are some more fun facts:

Pet insurance for black cats, and every other colour

One bit of bad luck your black cat is likely to bring is a hefty vet bill. But most cats will do that at some point in one of their nine lives. Luckily, our online cat insurance plans are affordable and customisable, and take the financial scare out of getting medical treatment for your oet.

Help us celebrate National Teddy Bear Day by sharing a photo of your pet with their favourite teddy!#NationalTeddyBearDay ... See MoreSee Less Is Dog Insurance Worth It? Cat Insurance? Yes – Now! Kiwis Give Up Pets for Adoption