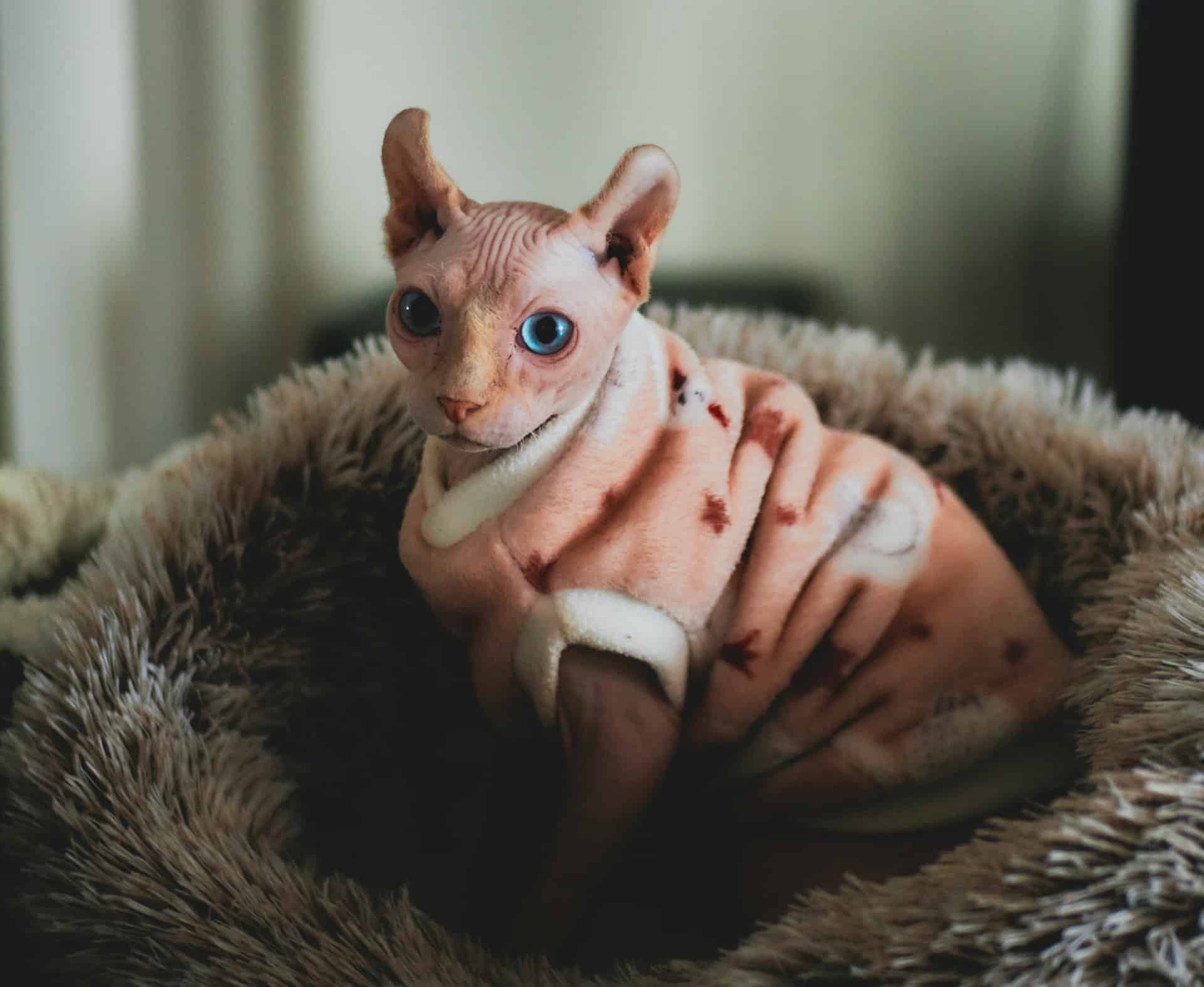 Hairless cat breeds are somewhat of a mystery. Do they need extra cuddles to keep warm? Do they need jackets in winter and sunscreen in summer? Importantly – Are they hypoallergenic? There are so many questions to ponder. Possibly the main point to note is that like furry cats, hairless cats are unique in so many ways.

For one, hairless cats’ fur-free attire is thanks to a natural genetic mutation. While many breed traits in purebred cats are intentionally created or engineered, the hairless trait originates purely from natural selection. In short, once upon a time a furry cat gave birth to a hairless cat.

Simply insert *mind-blown* because that is seriously pawsome stuff. Now without further ado, let’s find out about five furless felines you need to cuddle!

We’re not sure if it was all the long-hair flying around in the sixties, but this is the era that gave rise to the intentional breeding of the Sphynx cat breed. People often think that it originates in Egypt (possibly due to its name) however its story is said to start with two original breed lines from Toronto and Minnesota. That said the Sphynx is still sometimes affectionately known as the ‘Egyptian hairless cat’.

Sphynx are known for being loyal and engaged and make wonderful pets. They’re intelligent and energetic and love meeting your friends when they come over to visit. You could say they’re a bit of a social butterfly.

Are you a cat person who loves dog traits? Then this could very well be the cat for you, as they’ve a bit of a rep for being a ‘dog-like cat’ and love to romp up to the door to greet you when you come home.

Discover more about this hairless cat breed’s quirks and grooming needs in our article on ‘ugly cat breeds‘ (that actually aren’t ugly). Here are some other interesting Sphynx facts:

As far as breed histories go, the Elf hairless cat breed is virtually brand new. It’s a hybrid between the Sphynx and American Curl cat breeds created by breeders and cat enthusiasts Kristen Leedom and Karen Nelson in 2004.

These two ladies were hoping for a new breed that would embody all the coolness of a Sphynx cat’s character and physical traits along with the cuteness of curl-tipped ears. And they succeeded! Much like the Sphynx, the Elf is intelligent, playful and social. It’s a hairless cat that will easily integrate with most households.

Pedigreed pets are usually bred from a limited gene pool to continue specific breed traits. Unfortunately limited gene pools often result in certain hereditary health problems. On the flipside, cross-breeding can widen and diversify an animal’s gene pool – whether intentional or not, this can be good for genetic health.

Given the Elf hairless cat is such a new breed, not all that much is known about its health. However, here’s some information about caring for an Elf kitty:

When we say the Peterbald is a nineties kid, we don’t mean emo and black eyeliner. Rather, this wisened looking cat breed is also fairly new and was bred for the first time in 1994. This all happened in St. Petersburg, Russia, which is where this charming kitty gets the ‘Peter’ part of its name from.

Similar to both the Sphynx and Elf, Peterbalds are known for being dog-like in their manner. They’re loyal, loving and lurrrve spending quality time hanging out with their people.

Like their fur-free counterparts, these guys also have a lower body temperature than fursome cats. This results in a higher metabolism which helps them heal from wounds and scratches quicker than most other cats.

For Peterbald parents and parents-to-be, here are some Peterbald fast facts:

The Donskoy is a hairless cat with many names. It’s been called a Don Hairless, Don Sphynx, Russian Donskoy and Russian Hairless. And you guessed it, this kitty’s tale also starts in Russia in the city of Rostov-on-Don, where it gets its name.

The first in the line of Donskoys was a rescue cat adopted by a breeder named Elena KovalevaIn in 1987. However, at the start, Varvara (that’s what Elena named her kitten) was a regular tortoiseshell kitten. But by four months, Varvara started losing her fur.

When Varvara mated with a local tomcat her kittens became the founding stock for the Donskoy.

Donskoys are curious and kind, loving and loyal. They make great pets because they love their people. They don’t always, however, like other cats!

Perhaps owing to being the fresh face of the noughties (AKA new) the Levkoy is yet to be officially recognised by cat breeding registries. Nevertheless they make great pets and love hanging out with their families.

They’re sweet, loyal and at dinnertime are highly talkative. If you live alone and need some extra chatter this could be the cat for you.

From what we’ve read this breed is yet to be recognised by the world’s largest feline registries, but they still make a great fifth addition to our top hairless cat list.

Do hairless cats get cold?

Because hairless cats can’t regulate their body temperatures as much as furry cats, they can easily get cold. Hairless cats do indeed need extra cuddles to keep them warm but that’s not all you can do. Cat beds (and jackets) can keep kitty warm. And while we generally advise you not to dress up your pet, hairless cats can do with an added layer on colder days.

Besides getting cold easily, hairless cats’ sensitive skin burns easily in the sun. Unless your vet advises you on pet safe sunscreen, it’s better to protect them by covering them up or keeping them indoors. If you’re after an indoor cat a hairless cat could be tail-or made for you.

You may also have noticed that bathing is on the to-do list. While furry cats have hair that helps absorb and distribute the natural oils produced by the skin, hairless cats simply don’t. This is why they need regular baths (not hot!) to remove excess oils. Additionally they need their ears routinely cleaned.

If you’re interested in making a hairless cat your fur-free baby, read how to find an ethical dog breeder because the steps are the same for cats. And if you’re wondering about the verdict on whether or not hairless cat breeds are hypoallergenic, it’s yet to be 100% resolved. Some say yes while others will say there’s no guarantee.

Cat insurance for your (furry or hairless) cat

Cat insurance is all about peace of mind for you and safety for your cat. Vet bills can cost an arm and a leg (but pet insurance doesn’t). Knowing you have a pet plan in place means you’ll be able to provide your cat with the medical and health care they need – when they need it most.

Not sure? Read the story of Steve the Russian Blue cat to understand how pet insurance can help save pets in times of need. Be sure to read our PDS too, as not all breeds are covered. Or click below and we’ll get back to you.

Two dogs were stolen during a break-in at a Grey Lynn property over the weekend.
View on Facebook
· Share

Ever wondered why your cat randomly licks you sometimes? It’s likely one of four reasons… ... See MoreSee Less

Why Do Cats Lick You? Top 4 Reasons - PD Insurance NZ

Why do cats lick you? Cats are curious creatures, but their constant licking is probably down to one of these four reasons. Click to read now
View on Facebook
· Share Cavort With The Cavoodle – Breed Profile and Traits